[What follows is the third and final extract from chapter 15 of The Colonel and I: My Life with Gaddafi by Daad Sharab. Articles about this book can be found in The National here and here. The previous extracts on this blog can be read here and here.] 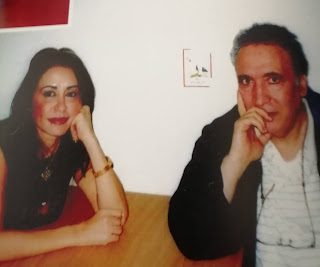 As he was released, al-Megrahi said he bore the people of Scotland no ill will, and thanked the prison staff at Barlinnie and Greenock for their kindness. He received a hero’s welcome back in Tripoli. [RB: Saif al-Islam Gaddafi in an article in The New York Times denied that there had been a hero's welcome.] I was in Jordan at the time but watched on television, noticing that al-Megrahi flew home on the same jet I’d helped Gaddafi buy from Prince al-Waleed bin Talal of Saudi Arabia. Also on board was the Colonel’s son, Saif, in his white robes and holding al-Megrahi’s arm aloft as he stepped on to Libyan soil.

Saif was basking in the glory of the triumphant homecoming, although in reality I knew he’d barely been involved. I was seething inside as I watched him steal all the credit, while the real hard workers were nowhere to be seen. Saif regularly went to London, but he never once bothered to hop on a domestic flight to Glasgow to visit al-Megrahi in prison at either Barlinnie or Greenock. The jubilant scenes didn’t go down well in the West, which had requested a restrained welcome, but this was too good an opportunity to pass up. It was rare that Libya got the upper hand against America.

However, when he came home I hardly recognised al-Megrahi who was walking with a stick and had to be helped down the steps of the aircraft. He looked nothing like the healthy man I’d last visited a few years earlier. It was said at the time of his release that he would die within three months. In fact he lingered on for another three years, even outliving Gaddafi which no one could have envisaged at the time. I found the outcry from the West over al-Megrahi’s failure to die sooner distasteful. I always felt very sorry for him and never doubted his innocence. What reason did he have to lie to me, an agent of the regime?

In a moment of desperation, he once told me in prison: ‘They would be very happy for me to die here.’ There is a suspicion in my mind that al-Megrahi did not receive very good medical attention in prison, because prostate cancer usually responds well to treatment if it is caught early. He died at his villa in the suburbs of Tripoli, in May 2012, aged 60. I hope he found peace and was able to enjoy precious time with his family. In my eyes al-Megrahi was the 271st Lockerbie victim.

By then the final compensation cheques had been paid to the families, much to the dismay of Gaddafi. Although he appreciated the importance of keeping up the instalments, he often railed against the unfairness and how the handing over of compensation would be interpreted. ‘Why should I do this when Libya is innocent?’ he asked many times.

For those working behind the scenes it was a constant battle to persuade the Colonel to take a pragmatic approach. Finally Abdul Ati al-Obeidi, one of his key advisors on Lockerbie, spelled this out in very direct terms. At one of our regular Lockerbie briefing meetings with Gaddafi, he told the leader: ‘Look, we don’t want to see you suffer the same fate as Saddam Hussein. If the cost is money, then we have a lot of money. Let’s just pay them, get rid of this issue, open up our country and keep it stable. America can do anything it wants. Do you want us to end up watching you on TV like Saddam Hussein?’

It was a very blunt reference to Saddam’s capture and humiliation by US forces, which had so rattled Gaddafi. For all his bluster he knew that America and its allies could topple him at the drop of a hat. The bombing of his compound in 1986 by the Americans was a constant reminder of the West’s power. After al-Obeidi’s intervention the Colonel didn’t make such a fuss about the blood money.

The burning question remains: if al-Megrahi was innocent, as I firmly believe, then who brought down the Pan Am flight?

At the time of the Lockerbie bombing there were loose alliances between various states and organisations. They were generally opposed to the ideals of the West, and pooled resources. Bombing an aircraft is no easy matter, so if one country didn’t have the expertise to carry out an attack it simply funded a group that did. I don’t carry a smoking gun but al-Megrahi, who knew the case inside out and had access to Libya’s files on Lockerbie, was convinced that it was a joint enterprise between Iran, Syria and The Popular Front for the Liberation of Palestine [-General Command]. The shooting down of the Iranian passenger jet by the American warship Vincennes, six months before Lockerbie, was too much of a coincidence. It was the crucial link, but by the time the evidence began to stack up no one wanted to point the finger at Iran or Syria, who had helped Western coalition forces in the first Gulf War. My time on the fringes of international diplomacy taught me that politicians are like shifting sands in the desert.

Sadly I never got the opportunity to see al-Megrahi following his release but I know he intended to present fresh evidence at his appeal, insisting he had nothing to fear or hide. ‘I had most to gain and nothing to lose about the whole truth coming out,’ he said.

I am sure the British intelligence services know the truth about Lockerbie, but it has been covered up. Al-Megrahi’s early death was convenient, although his family did eventually get a posthumous appeal. It came as no surprise to me that it was rejected, or that al-Megrahi’s family have called on the British government to release secret files which implicate Iran. Justice has not been done and, for political reasons, I fear we may never learn the truth.

In another recent development the US has named and charged another so-called suspect, Abu Agila Mohammad Masud. I don’t claim to know every member of the Libyan intelligence services but I can tell you I never encountered him during my many years in Libya, or heard his name mentioned by Gaddafi. Why did the Americans choose to make this announcement on the 32nd anniversary of Lockerbie? In my opinion it is nothing more than another crass political stunt.