Edwin Bollier has announced on Facebook that Ulrich Lumpert died in Zürich this morning. Lumpert was the engineer employed by MEBO who designed the MST-13 timer that was allegedly used in the bombing of Pan Am 103 over Lockerbie. 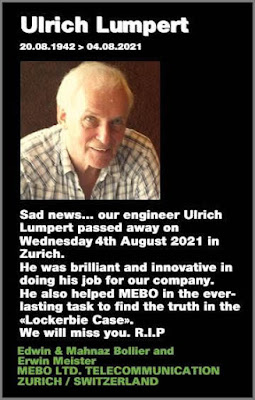 On 29 August 2007 an item was published on this blog that contained the following:

"Ulrich Lumpert, an engineer at one time employed by MEBO in Zurich, gave evidence at the Lockerbie trial that a fragment of circuit board allegedly found amongst the aircraft debris (and which was absolutely crucial to the prosecution contention that the bomb which destroyed Pan Am 103 was linked to Libya) was part of an operative MST-13 timer manufactured by MEBO. In an affidavit sworn in Switzerland in July 2007 [available here] Lumpert now states that the fragment produced in court was in fact part of a non-operational demonstration circuit board that he himself had removed from the premises of MEBO and had handed over to a Lockerbie investigator on 22 June 1989 (six months AFTER the destruction of Pan Am 103)."If this is true, then it totally demolishes the prosecution version of how the aircraft was destroyed, as well, of course, as demonstrating deliberate fabrication of evidence laid before the court."

Further information relating to Ulrich Lumpert and the Lockerbie case can be found here.

I shall periodically disclose here the all-time total number of pageviews, as provided by blogspot/blogger. As at 08.00 GMT on 16 January 2022, the pageviews numbered 2,324,377.

If you have news or views about the Lockerbie case, you can contact me at robbieb204@gmail.com