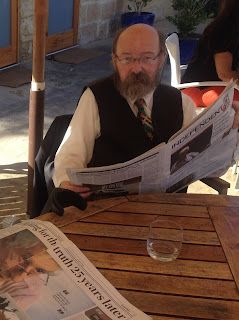 On 22nd March 2018 Justice for Megrahi (JfM) lost a valued supporter and friend.

Robert Forrester brought intellect, skill and enthusiasm to his role as JfM Secretary. We will miss his unique talents and personality and are left with a deep and profound sense of loss.

Over the years many of us had heard Robert express his determination to be buried in Highgate Cemetery in London beside his hero, Karl Marx. Many saw this as a wish unlikely to be fulfilled.

We should have known better. On Friday 31st August members of our committee joined with family and friends in celebrating his unique life at the interment of his ashes at Highgate Cemetery in the shadow of a large bronze bust of Marx's head and shoulders set on a magnificent marble plinth.

In true Robert style this unique ceremony took place with the music of a jazz band reverberating around the gravestones and tombs of Highgate’s great and good and somehow this musical invasion appeared completely appropriate in this haunting sepulchral place.

At the gathering afterwards we joined his family, friends and students he had taught over the years. We shared memories, laughter and tears as we followed Robert’s journeys and adventures as he travelled in the Lebanon, Syria, Egypt, Iran, Afghanistan, Pakistan, Italy and China before returning home to Scotland.

Robert’s work for Justice for Megrahi should never be underestimated and will remain as a fitting memorial to him. He brought a range of unique talents and a deep sense of justice into play as we worked to uncover the duplicity and deceit behind the system’s efforts to cover up the truth about the Lockerbie tragedy and to remove this massive stain on Scottish Justice.

We wish you could have remained with us to see the results of your work, Robert, but will always be thankful that our paths crossed albeit for too short a time. 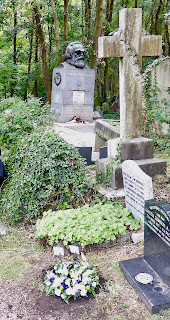 I shall periodically disclose here the all-time total number of pageviews, as provided by blogspot/blogger. As at 09.30 BST on 01 July 2022, the pageviews numbered 2,364,533.