[This essay is based largely on research by its author, Kevin Bannon, for a thesis submitted in 2013 at Swansea University and later successfully defended for the award of the degree of PhD.  It is to be hoped that the thesis itself will soon be more widely available.]

The conviction of Abdelbaset Ali Mohmed al-Megrahi was based primarily on the police statements and court testimony of Tony Gauci, a Maltese shopkeeper who identified him as the man who bought a number of items from his clothing shop two weeks before the bombing. Identical items were found at the Lockerbie crash site and by their condition, forensic investigators established that they were packed in the same suitcase as the bomb when it exploded.

Police detectives first met Gauci in Malta in September 1989, nearly nine months after the bombing and in his initial statements he firmly recollected and reiterated that the purchaser of the clothes was 50 years old and six feet tall. He said that it was raining at the time of the purchase, prompting the man to buy an umbrella, and in interviews one year apart or more, he asserted that the purchase had taken place in late November 1988 and that the local Christmas decorations were not yet up.

Al-Megrahi was 36 at the time of the purchase and was measured at 5’8” at trial – though both his passports noted him as 170 cm tall – slightly under 5’7”. Records showed that the hanging of illuminated Christmas decorations outside Gauci’s shop was completed on 6 December when they were switched on. It is accepted that Al-Megrahi was not in Malta until 7 December, a day when local meteorological records revealed that it was almost certainly not raining. On the basis of this testimony - Gauci’s freshest recollections - the purchaser was evidently not al-Megrahi. In any event, Gauci was quite certain that the man had not purchased any ‘Slalom’ style shirts, one of which was to prove the most crucial item accompanying the explosive device.

However, during intermittent interviews over the following year and beyond, Tony Gauci modified his recollections and these modifications proved to be entirely in favour of the Crown narrative. Indeed, by the end of his court testimony in July 2000, virtually every aspect of his evidence had changed, and in several instances it had changed drastically. Now the rainfall had been reduced to a brief, light shower – hardly wetting the ground and falling just as the man was leaving the shop. Now Gauci was “sure” the Christmas decorations were up and lit when the Libyan buyer visited his shop. The purchaser visited “about a fortnight” before Christmas – eliminating a November purchase - and Gauci now stated that the man had bought two ‘Slalom’ shirts. In court Gauci said, cryptically, that the purchaser was “...below six feet...he wasn’t small. He was a normal stature.” The descriptions of other items purchased were revised, becoming more similar to those in the suspect suitcase: the colour of the Slalom shirt, the pattern on pyjamas, the motif on a baby’s romper suit, the colour and quantity of cardigans.

Police investigators sought Gauci’s help in identifying the purchaser from photographs. After several previous photo-identification sessions, on 15 February 1991 Gauci inspected a card with 12 photos. This session took place in the company of four police investigators, all of whom knew which picture was of the suspect and the pictures were placed far enough apart for them to be aware which one was being examined by the witness – improper conditions for such a photo-session. At first Gauci had said ‘they are all too young’ but he was advised to allow for the age discrepancy and told that the man he saw ‘could be 10-15 years older’ – a blatantly illicit prompt. Gauci stopped at al-Megrahi’s picture (‘no. 8’ middle row right) and declared “This is similar but is maybe 10-15 years younger” confirming the age discrepancy of Gauci’s early recollections of the purchaser. Police investigators and Camp Zeist judges alike regarded this vague statement as the clinching identification of al-Megrahi. In fact Gauci had twice identified a newspaper picture of Abu Talb as looking like the purchaser. Abu Talb was 15 years junior to al-Megrahi, is more slightly built and has a pronounced limp – obviously quite different to any of Gauci's other descriptions of the purchaser.

As the picture of al-Megrahi was said to be dull and grainy, DCI Harry Bell had the other pictures dulled-down so that the ‘suspect’ photo would not unduly stand out; but al-Megrahi’s picture remains of singularly poor quality by comparison. The thickness of the hair styles on some of the photos appear to have also been graphically enhanced with something like a felt pen. The middle pictures in the bottom row for example make their subjects look ridiculous as if they are wearing theatrical wigs. Presumably the purpose of this exercise was also to equalise the photographs but it gives away that these pictures are the ‘fillers’ and not the image of the suspect. 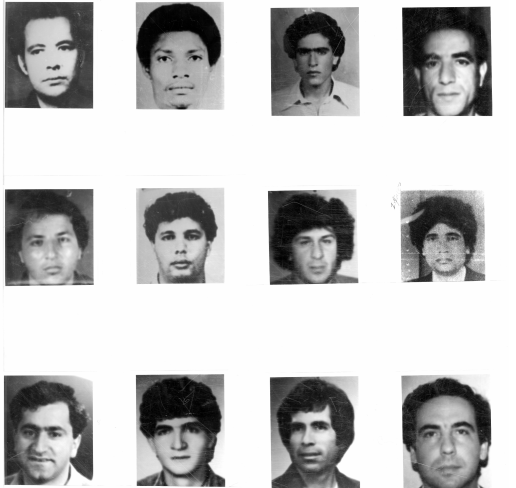 By the time Tony Gauci picked out al-Megrahi at an identification parade at Camp Zeist in April 1999, he had been exposed to pictures of him in the international media. A Maltese police officer present at the parade admitted in defence precognition that he himself would have been able to pick out al-Megrahi though never having met him - such had been the media coverage. Therefore neither this parade nor the photo-session had been properly controlled identification processes – quite the opposite.

In 1990 police investigators described Gauci as confused and ‘difficult to believe’ but this was not disclosed in court. Nor was it revealed that they had become concerned at the apparent suggestibility of Gauci, noting that he had been ‘trying to please’ them. The US Department of Justice fell over themselves to please Gauci, eventually paying him ‘in excess of $2m’ as a reward for his assistance with the investigation.

In court the details of a six feet tall, 50 year old purchaser in Gauci’s freshest recollections, were skipped over by Defence counsel and brushed aside in the judges’ deliberations. In their 80 page explanation of their verdict, the judges admitted to having a ‘major difficulty’ with the introduction of the bomb at Malta’s Luqa airport, which remains unexplained – as was its subsequent, automatic transit through Frankfurt airport and Heathrow. Nevertheless the judges cited Tony Gauci’s evidence as ‘accurate’ and ‘entirely reliable’ - one of the many absurdities to emanate from Camp Zeist.
Posted by Robert Black at 12:36

I shall periodically disclose here the all-time total number of pageviews, as provided by blogspot/blogger. As at 09.00 BST on 01 August 2022, the pageviews numbered 2,370,671.